Welcome to A Noteworthy Music Studio Meet Our Incredible Teachers 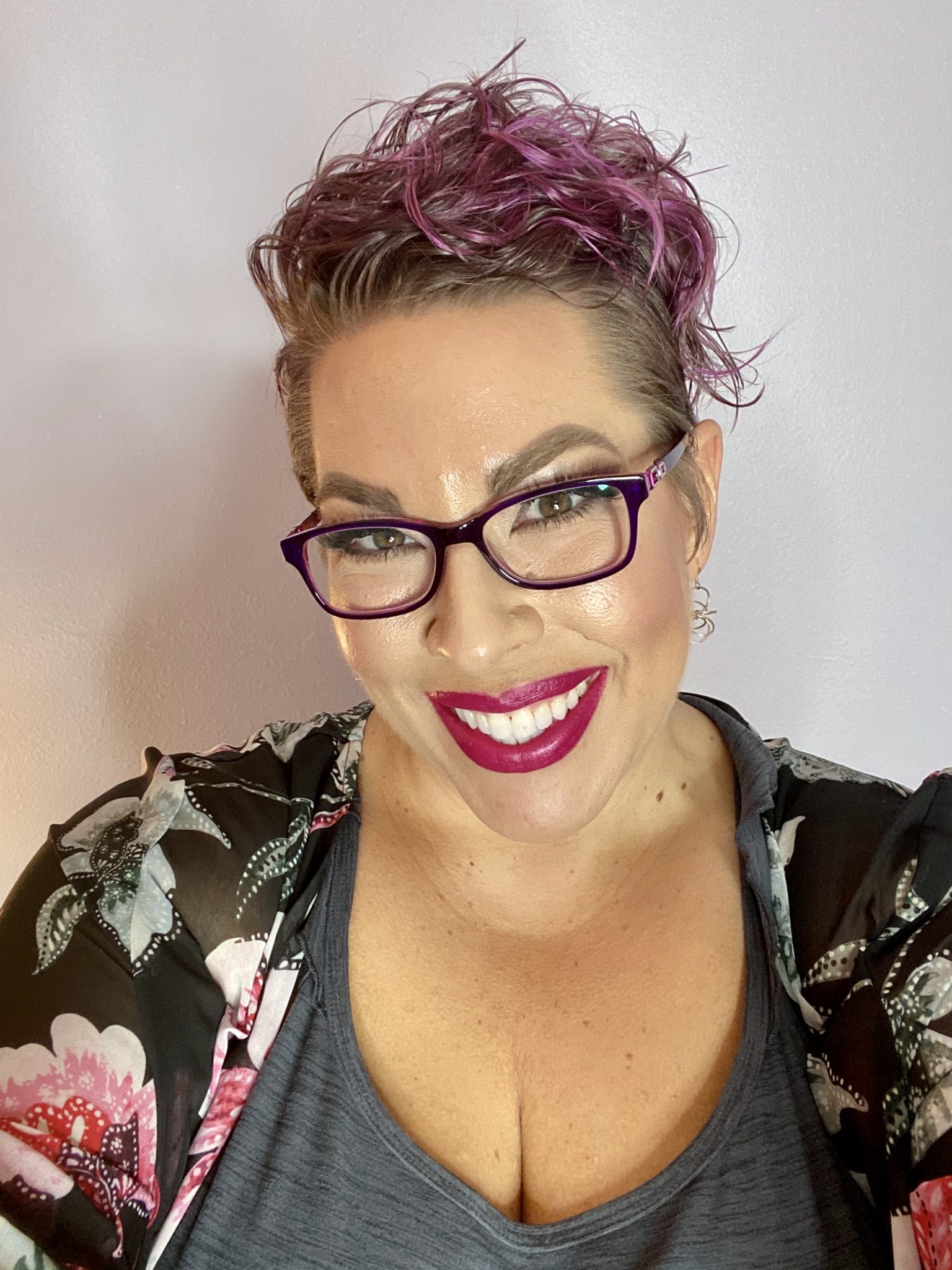 Book Rebekah!
Rebekah is the boss lady studio owner and master voice maven. She is passionate about teaching, performing, and music directing. Her main goal as a teacher is to help aspiring musical theater actors learn healthy and practical modern vocal techniques and empower them to embrace their potential as confident artists. Drawing on her decades of experience performing and over 17 years of teaching, she strives to make students feel valued, have fun building the voice of their dreams, and provide a second home where clients feel totally comfortable to shine as they are!

Although she started as a classically trained pianist and singer, Rebekah believes that all music is relevant to learning. She expanded her teaching to include everything from Opera to Rap (“Hamilton”, anyone?), and even screaming rock technique. She specializes in modern Musical Theater and pop/rock vocal techniques and styles. Her ideal clients can sing their faces off, but lack training and want to learn healthy technique, OR they’re overtrained for legit/opera styles and want to come to the dark side of belting.

Rebekah has a BA in Vocal Music and an MA in Counseling from Morehead State University. She has all three levels of certification in Commercial Contemporary Music from Shenandoah University’s prestigious CCM Institute. She will start school this Fall 2021 at Saint Mary of the Woods College. As one of only 48 students in her program from across the country, she is studying to become a Board Certified Music Therapist with a specialty in trauma informed care.

Rebekah is a crazy cat lady and dog mom who is fanatical about animal rescue (and The Beatles). PennyLane is the shopdog commonly seen collecting belly scratches at the studio. EllaRigby is her calico Maine Coon who rules over the house. Lucy in the Sky is the baby of the pride, a light orange Maine Coon kitten just shy of a year old. Be prepared for pictures.

Other fun facts: Jurassic Park is her favorite movie, pineapple absolutely belongs on pizza, her favorite musical is RENT followed closely by Hamilton, and she can always be found carrying a backpack.

Lessons with Rebekah are by audition only as she only accepts 8 clients into her studio at once. Hayley Pflug began her musical training at Florida State College at Jacksonville. After receiving her AA, Hayley moved to Winter Park, where she earned her Bachelor of Arts in Music from Rollins College. She is classically trained and proficient in vocal rock, pop, musical theatre and jazz styles.

Hayley’s teaching philosophy is to provide her students with a fun, funny, relaxed zone to learn their music, discover their own artistry, dive into their favorite characters, and build their confidence!

Hayley is an active vocalist in the Central Florida area. She has been featured on WPRK, and you’ll also see her singing her heart out at Roque Pub, The Brass Tap, World of Beer, Interlachen Country Club, Dave’s Boathouse and many Rollins’ events.

A choir nerd at heart, Hayley also collaborates with groups around Central Florida. Summer 2017, she was a featured soloist on a tour of Germany and the Czech Republic with the Bach Festival Society of Winter Park. She loves performing with CineConcerts, having been featured in the choir for Harry Potter and the Prisoner of AzkabanTM — in Concert, and Kingdom Hearts: World of Tres, at the Dr. Phillips Center for Performing Arts. Talk about childhood memories coming full circle!

Hayley’s students are active performers. You’ll see them performing with Universal, the Bach Festival Society of Winter Park, as well as studying at UNC Chapel Hill, UNF, and Valencia.

In her free time, Hayley enjoys all kinds of crafting, playing Nintendo Switch, trying out all of Central Florida’s pizza joints, and chilling at home with her fur babies, Carl and Ellie. 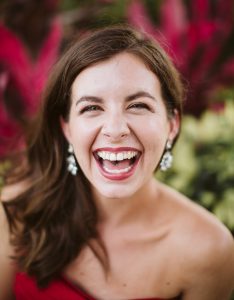 Shannon Jongema is an active performer and teacher in the Central Florida area.  While she spends most of her time singing opera and musical theater, Shannon loves vocal and instrumental music of all kinds.  Telling meaningful stories through song is Shannon’s passion, and she is delighted to be sharing that passion with her students at A Noteworthy Music studio!

Shannon has been fortunate to share her love of music on stages both in the United States and abroad.  Some of her favorite musical experiences so far include touring Germany with Musiktheater Bavaria singing the role of Gretel in Hänsel und Gretel and trying to dance with the ensemble in Mamma Mia!, as well as performing the role of Susanna in The Marriage of Figaro with her alma mater, Rollins College.

Most recently, Shannon has enjoyed performing with The Bach Festival Society of Winter Park as the soprano soloist in J.S. Bach’s Mass in B Minor, and in Rossini’s “Duet for Two Cats” on the organization’s Humor in Music concert.  Shannon is also part of local a capella group Vox Potentes and was featured as a soloist on the group’s debut album Love Came Down at Christmas.  This coming season, Shannon will be rejoining the Bach Festival Society of Winter Park to cover the soprano soloists in Mozart’s Regina Coeli and Mendelssohn’s Elijah, and is in the process of recording a second album with Vox Potentes.  On any given weekend, Shannon can usually be found at singing at First Congregational Church of Winter Park, cantoring mass at St. James Catholic Cathedral, or sometimes both!

When she’s not busy performing, Shannon loves cuddling with her cats Oskar and Toby, watching Parks & Recreation, doing yoga, going on coffee dates with her friends, or training for her next marathon.  Vegan tacos, coffee, and doughnuts are the way to Shannon’s heart, but she loves sampling new and different plant-based foods of all kinds.  But if there’s anything Shannon loves more than food and music, it’s her students!

Shannon teaches voice and beginner to intermediate piano, and is available Tuesday and Thursdays. 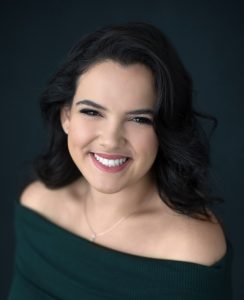 Vicki Geismar is a vocalist in Orlando, Florida. She loves singing all kinds of music, ranging from classical to jazz. Vicki loves expressing herself through music, and her love for the art has led Vicki to achieve so many goals which she never thought possible. She hopes to instill that drive and passion in each and every one of her students.

Vicki started her musical journey as a member of the Opera Orlando Youth Company and Winter Springs Performing Arts. In 2018, she had the honor of soloing with The Zamir Chorale Foundation at Lincoln Center. She is currently a Music Major at Rollins College in Winter Park, Florida, where she is a member of a variety of ensembles, including Women’s Vocal Jazz and the Bach Festival Society. Vicki is also the Soprano Choral Scholar at St. Michael’s Episcopal Church and works with Grow & Sing Studios assisting with kindermusik birthday parties.

Whenever she’s not practicing, Vicki loves spending quality time with her pets, Titus and Boston. Some of her favorite things to do is take them on long walks with her friends, and watch movies together. Some of her favorites include the Harry Potter Series, and anything classic Disney. While not a big sweets person, Vicki has no problem eating a whole box of Mac and Cheese or an extra large Chic Fil A meal.

Vicki teaches voice and beginning piano and is available Mondays, Tuesdays, and Wednesdays. 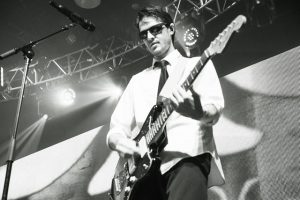 Multi-instrumentalist and Orlando native Aaron Lingelbach has been teaching and performing guitar and other guitar-like objects professionally for nearly a decade. His love and thirst for music can be traced back to his grandma’s upright piano and his parents’ Lynyrd Skynyrd greatest hits CD. After learning clarinet and saxophone in grade school, his sights became set heavily on the guitar. Several years and Metallica/Dave Matthews riffs later, he found himself studying classical guitar at UCF where he would earn both his Bachelors and Masters of Music.

Since then Aaron has been primarily teaching private guitar lessons as well as performing on stages all across the state and even several cities in Puerto Rico. Notable venues include City Walk, Sea World and the Plaza Live. Over the years he has been involved in many musical projects of many musical genres ranging from punk rock to country outfits to Billy Joel cover bands to big band jazz.

His lesson plans are uniquely designed and geared specifically for the tastes, wants and needs of each individual student. Whether you are striving to be the next great rock star, or want to simply strum a few chords and sing a few of your favorite songs, he will set you on the right path and nurture your musical growth. The only limits are your own creativity and hunger for all things music! He can’t wait to share this wide variety of musical experience and taste with all of his students!

In his free time, you can usually find Aaron practicing and hanging with his big goofy dog, Dude. On the off-chance that there isn’t a guitar in his hands, he’ll either be playing video games, chess or eating something involving peanut butter. You know how chocolate lovers get the word ‘Choco-holic?” Yeah, he’s whatever that word is, but for peanut butter.

Aaron teaches most things with frets and strings (ie, guitar, ukulele, even banjo!). He is available Mondays and Tuesdays.
Book Aaron! 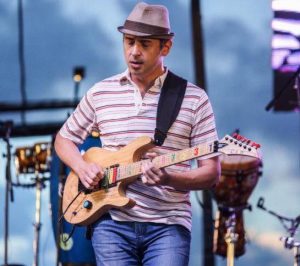 Carlos DeSoto grew up studying and playing music in Miami and Orlando, FL. By the age of 16, he was teaching music part-time and playing shows. At 18, Carlos received a scholarship to study at Berklee College of Music in Boston, Massachusetts. He holds a Bachelor of Science in Psychology and Jazz Studies from the University of Central Florida, and a Masters degree in Jazz Studies from the University of Miami. He has played with Grammy Award winning artists Eddie Money, John Tesh, and has opened for bands like Journey, The Knack, and John Secada.
Favorite Ice Cream Flavor – Peanut Butter Cup
Does pineapple belong on pizza? – Not on my pizza please!
Favorite Band – Not a fair question for any musician. But I will say that I grew up in the eighties…
Carlos teaches guitar, ukulele, bass, and piano. He is available Wednesdays and Thursdays.
Book Carlos!